There are some dishes that you just can’t miss on a visit to Vienna. Here’s the must-eat dishes of the Austrian kitchen: 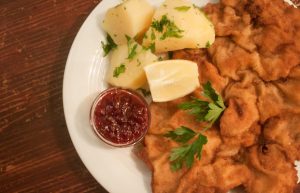 If you had to name one signature dish to Austria, it would definitely be the mighty Schnitzel. Even though it’s an extremely popular dish around the globe, it’s hard to find it anywhere as thin, crispy, golden and delicious as you do in Vienna. The size of this flat, tender piece of bread-crumbed meat will often exceed the size of your plate.

Fun fact: the traditional Wiener Schnitzel is made with veal.

Traditionally, the Viennese Schnitzel is made of veal and served with potato salad and cranberry jam. Nevertheless, the every-day Austrian Beisl (local neighborhood eatery) will mostly serve a version made of pork meat, with a side of your choice (the potato salad is mostly available but you can also simply ask for fries or roasted potatoes. The pork version is often just half the prize, and double the size and in many locals’ opinion provides the same culinary experience. 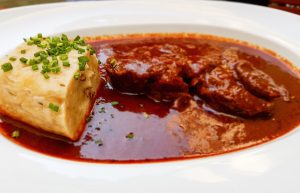 This popular Austro-Hungarian co-creation (originating in the Pannonian region) is a hearty, richly flavored stew that comes in many variations. Typically, in Austria you will find the Rindsgulasch – a veal stew boiled for many hours in an intense gravy sauce – served with bread dumplings and pickles. Many restaurants will serve a Erdäpfelgulasch, another stew-like dish that throws potatoes into the mix, often with sausages, or pork meat. The Viennese have a favourite of their own, called the Fiakergulasch (the Gulasch of the horse & carriage drivers), which is another variation of the meaty stew. This version is topped with a fried egg and sausage and served with dumplings and pickles on the side. It’s a true winter meal if you’re looking for something to warm you up from the inside-out! 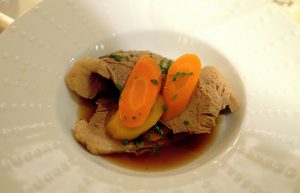 This is probably the most noble dish in the Austrian cuisine. Well, at least locally it’s considered noble. It has quite an haute-cuisine reputation and it’s mostly served in upper class restaurants for a price somewhat higher than your regular lunch dish. No wonder many are disappointed when finding out that the Tafelspitz is actually boiled beef submerged in a broth and with root vegetables floating about. The secret in its flavour, however, lies in the quality of the ingredients. Only the best, most tender parts of beef become Tafelspitz, and the bone-broth takes many hours to get to take on its intense flavour. The Tafelspitz was Emperor Franz Joseph’s favourite dish, so no wonder it’s regarded as something so exquisite. Warning: not every Austrian restaurant will serve a Tafelspitz, and not every Tafelspitz will live up to its reputation. 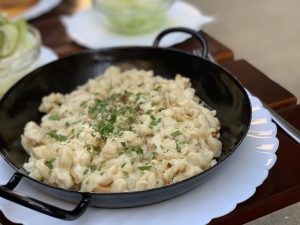 This a traditional dish for the vegetarians (there aren’t many of these in the Austrian kitchen) – Käsespätzle. This is one of those dishes you always feel like. It’s probably the closest thing to a mac’n’cheese dish you will find in Austria. It’s a comfort food that can be washed down with a beer for either lunch, or dinner. This typical mountain or farmer’s dish is made up of handmade egg noodles, typically mixed with an intensely flavoured cheese and topped with chives and fried onions. The better the cheese, the better the Käsespätzle. 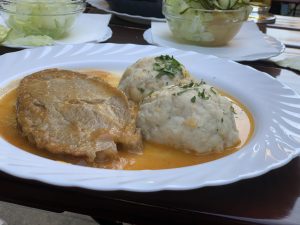 This typical Sunday dish is found on the menu in most traditional Austrian Gasthäuser (taverns). This succulent roast pork is a heavy dish, made up of a slices of pork that have been roasting in the oven for hours, smothered in a garlicky gravy and served with warm sauerkraut and potato, or bread dumplings. Variations of the dish include the tasty Kümmelbraten, cooked with cumin and served with a thick, crunchy crust, or the Schopfbraten, which means that the meat is particularly tender as it’s sourced from the neck region of the pig. 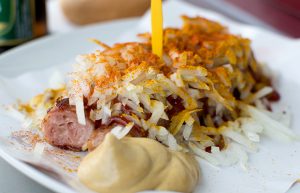 There is no doubt about it that the best place to try Austrian sausages is at theWürstelstand (sausage stands). These unpretentious street food stands are like local institutions, attracting everyone from suited-up business people to construction workers on their daily break. A quick chat with the grill-master is a must and so is a canned beer served on the side of the sausage of choice. While there is always some variety to choose from, the Viennese tend to go for the Käsekrainer, a thick cheese-filled sausage served with dark bread, mustard and fresh horseradish. Pickled gherkins, or hot peppers are also widely available, and balance out the somewhat heavy taste of this meaty snack. 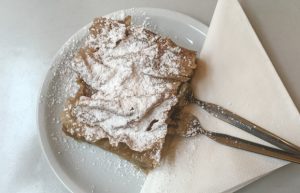 It’s fairly easy to find an Apfelstrudel in Vienna, and most of the time you can’t really go wrong when it comes to this pastry filled with regional apples. But to get the full experience, make sure you get it in a typical Viennese coffeehouse, where you’ll have it served to you in the proper way – warm, fresh out of the oven, with cream on the side. 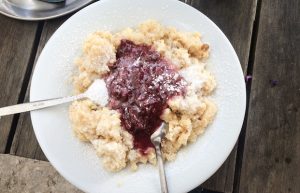 Another dish dedicated to the former Emperor of Austria, the Kaiserschmarrn is fluffy, caramelized shredded pancake, served with warm fruit compote. This scrambled pancake dessert is usually made fresh, so most restaurants will announce a waiting time when you order it. But it’s soooo worth it – these pancakes bites will be the fluffiest you’ve ever had. The secret to the fluffiness is that the egg whites are beaten separately until stiff and then mixed in the batter. The dough is then finally caramelized with sugar and high-quality butter. It’s heaven.

On Vienna a la carte tours, we make sure we take you to the restaurants and cafes where the locals go for the best versions of all of the dishes in this list. We can even organize a tour for you that is just focused on food! Contact us for more info, here.

What to do during winter in Vienna – handpicked by the locals and experts
Read More
5 magic Vienna Christmas markets away from the tourist crowds you shouldn’t miss
Read More
6 reasons why you should choose our tailor-made tours over hop-on-hop-off bus tours
Read More
How to best spend 48 hours on a visit to Vienna
Read More
Read our blog
Thank you for your request!
Our tour coordinator will be in touch with you soon.
Ok