These 5 experiences you can only have in Vienna – nowhere else in the world.

Enjoy a coffee in an imperial greenhouse 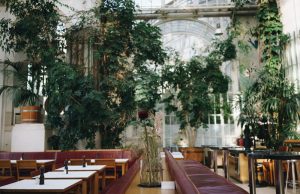 Set in gardens on the fringe of Vienna’s old city center is the Palmenhaus – a grand and beautiful Art Nouveau greenhouse. When you’re sitting amongst the draping palms and sipping your coffee, you may wonder at some point how this gorgeous space came to be and what it was in its former life. Well, it was a chill out space for the Habsburg emperor. That’s right, he used to like to sit amongst the tropical foliage just like you. Probably sipping at a coffee and enjoying a pastry, or a classic dish from the Austrian kitchen, just like you can.

During summer, the Palmenhaus boasts a gorgeous al fresco garden which looks out over – what used to be – the royal gardens. Neighbouring the coffeehouse is a butterfly sanctuary housed in the same gorgeous glass and iron building – the Schmetterlinghaus – which is also definitely worth checking out. 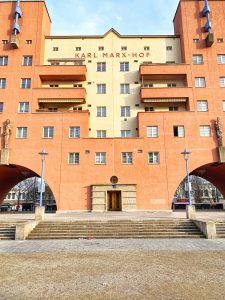 It spans 4 tram stops, is over half a mile long (more than a kilometre) and is one of the best examples of Socialist Utopian architecture. The Karl-Marx-Hof was built as low-cost social housing (which it still is to this day) for the working class.

And while just walking along the outside of this behemoth of a building is impressive – due to it’s large scale, and its unique appearance – you’ll only understand why you’ve travelled to the outer districts of the city to see this if you know a bit about its history.

The Karl-Marx Hof doesn’t only look like a fortress, but also played the role of one during the Austrian civil war. During the war it saw Nationalist and Marxist forces clash. The insurgents of the revolt barricaded themselves inside the building. They only surrendered when the army and the police bombarded the building.

Waltz at a Viennese Ball

Vienna’s celebration of Carnival is a far cry from the festive parties known in such places as Brazil and Germany. Carnival in Vienna sees people getting all dressed up in coat tails and ball gowns and waltzing the night away in some regal hall. If you haven’t heard of a Viennese ball, it is one of the most well preserved and thriving traditional events in central Europe that dates back hundreds of years.

They are elegant affairs running throughout January and February, with most having a theme attached to them, e.g. The Coffeehouse owner’s ball, the Jägerball (hunter’s ball), or the Blumenball (flowers ball) for which the town hall is transformed with a sea of flowers. The themes come from the organisations, or unions that used to organise them.

You have to dress appropriately to avoid the risk of being sent home (it seriously happens) with most demanding a strict dress code. Men are required to wear bow ties, rather than ties, and it’s usually mandatory for men to carry white gloves if they are wearing full evening dress. 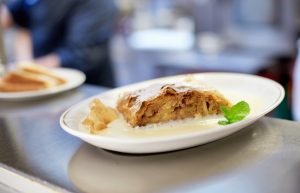 If you’re a fan of this fruity and flaky treat, you’re going to love this experience and you should definitely put it on your ‘Must do in Vienna’ list.

In the so-called Hofbackstube of the fancy looking Café Residenz, you can sign up for a masterclass in strudel baking. That’s right, you can learn from a master baker the secrets of how to make the dough super thin without breaking it, and what spices to use in the apple filling – it’s all really going to impress your guests at the next dinner party. Meanwhile, the pastry chefs are not only good with strudel, but they’re also an entertaining bunch.

Check out the world’s largest collection of Egon Schiele 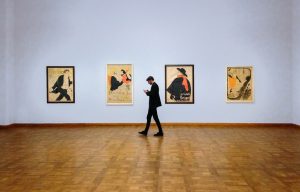 If you’re the kind of culture vulture that sees the beautiful in the interesting and seeks out the painters that captured the human body in its rawest form, you’ve probably heard of Egon Schiele, the major figurative painter of the 20th century.

Located in Vienna’s cultural core known as the Museumsquartier, there’s the Leopold Museum, and within this museum is the largest collection of Egon Schiele’s works in the world. You can fill days with just staring at hundreds of his paintings. Also, you can compliment your time with Schiele by spending some time with his mentor – Gustav Klimt – who is also featured in the Leopold Museum.

There’s nothing we love more at Vienna a la carte tours than giving people unique, once-in-a-lifetime experiences in Vienna.

We’ll not only ensure you experience the best and most unique things this city has to offer, but our expert guides will provide you with the stories and info that makes such experiences even more special. Ask us about how you can book a tailor-made tour, here!