While many visit Vienna to see the historic sites, the city also makes for a great destination for a fun-packed family holiday. The city is super safe, and offers loads of fun stuff to do for kids.

Planning your family vacation in Vienna is about to get extra easy with our 8 top tips below. With these, you’ll make Vienna a playground for the whole family:

The Prater park & its famous fun fair, the Wurstelprater 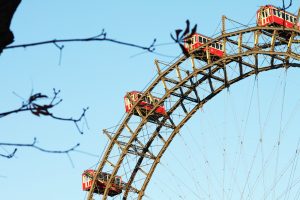 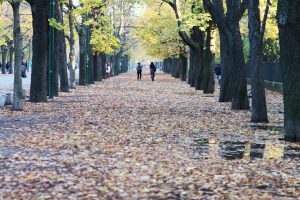 The Prater is the giant of all of Vienna’s parks. You could say it’s like Vienna’s version of central park, or like London’s Hyde Park.

The 6-million square meter park (think 2,420 football fields) has plenty of green meadows for you to lay down your blanket in for a family picnic, lots of playgrounds, and there’s also a small forest to get lost in. You’ll particularly like the Jesuitenwiese space, which hosts a kick-ass playground, volleyball courts and lots of active people playing football, or throwing frisbees.

The sweeping boulevard, the Prater Hauptallee, is ideal for a walk, or if the kids are demanding a more fun form of transport than their legs, you can hire four-wheeled family bikes.

The boulevard is bookended by a beautiful old coffeehouse at one end, and at the other – the weird and wonderful fairground, the Wurstelprater. This permanent fairground that never closes (except some of the attractions in winter) holds a special place in the hearts of the locals. Every childhood in Vienna involves the Wurstelprater. The unique thing about this fairground is the old rides that it still has running. For example, a ride on the old-timer Riesenrad (the Giant ferris wheel) is a must. 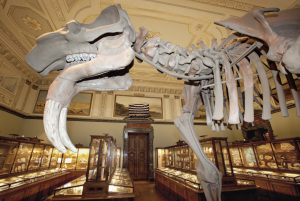 Here’s one to write home about and start your postcard with the line, “Not to brag but…”

Your children will love the Naturhistorisches Museum Wien and you will feel 5 levels regal-er just by walking into the building –  it’s a wow factor. Watch your kids wandering up and down the rows of genus after genus of stuffed animals – brought to you via the fine art of Taxidermy. Are the little ones saying, “here kitty kitty,” to the buffalos?  Maybe. Not the point. See their jaws drop when they find the elephants. Walk like the apes with them – the kids will think you’re cool even if the other adults don’t. Smile passively at your fellow museum goers when your kid is the one roaring at the top of their lungs at the diplodocus dinosaur. 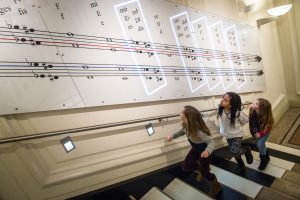 With the likes of Strauss and Mozart coming out of this city, Vienna’s biggest claim to fame is as a capital of music (well, classical anyway). And one of the best musical experiences to have in this city is a visit to the Haus der Musik (the house of music)

This award-winning museum offers several floors of exciting and interactive exhibitions that will have your kids stepping into the world of music.  And we have no doubt that you’ll be joining in too. How will you be able to resist when catch sight of the musical staircase, which plays a different note on each step.

You can also play a virtual dice game with the whole family that composes your own personalised waltz to which you can then dance around the room to. Plus – and brace yourself as this one is really cool – you can have a go at conducting an orchestra. Really. You get to virtually conduct the famous Vienna Philharmonic orchestra! 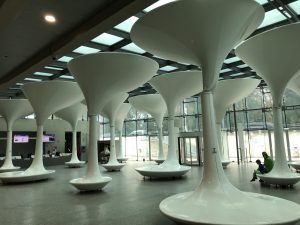 Believe it or not, but the Technisches Museum is one of the coolest museums to visit as a family in Vienna. The museum’s fascinating exhibitions, from the past to the future, reveal exciting stages of technological development that we as humans have taken over the years. It also highlights some of Austria’s contribution to that technological evolution, and there’s plenty of interactive stuff that will be sure to tire out the kids just the right amount.

A hike up the hills surrounding the city for a view, and a play 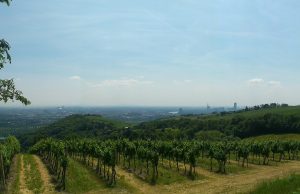 If the weather is cooperating, this is one of the best active things you can do when you and the kids want to do something away from all the historical tourist attractions in the city.

Vienna’s surrounded by hills, and on top of one of those hills is a café with a magnificent view, a meadow for the kids to run around in, and a playground – it’s got all a family afternoon requires.

A location called ‘Am Himmel’ is where you’ll find the café (Café Oktogon), the playground and the meadow. Meanwhile, a little walk away is Cobenzl where you’ll find a petting zoo (Landgut Wien Cobenzl) where the kids can cuddle a bunny, or play minigolf. There are also many of those wine taverns called Heurige you may have heard about when researching your trip to Vienna. If you haven’t, these are family-friendly places to eat, which serve up wine and food that they produce themselves. A visit to a Heurige is a great thing to plan in for lunch.

How to get there?

Catch the U4 metro line to Heiligenstadt and from there catch the bus 38A. Get off at the stop ‘Cobenzl Parkplatz’. Walk from the car park down to the junction of the road and go right. Just below the road there is a walking path through a meadow, and in about 200m you will reach Himmelstrasse. Follow this road and the signs. – OR – If you’d prefer to walk up there, there’s a walking trail that begins in Sievering and Grinzing.

A bike ride along the Donaukanal or around the ring 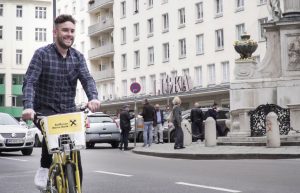 Vienna is super flat and super bike friendly, meaning that one of the best ways to tour the city is on two wheels. We know what you’re thinking – but how will I get my hands on a bike?! Don’t worry, there are plenty of options. If your hotel isn’t renting them out (which many hotels do) than you can find one of the city bike stations where you can rent a sturdy bike for the day for next to nothing.

In terms of where to ride your bike, and what route to take, one of the most stress-free and coolest mixes of urbanity and nature is the waterway that winds its way through the city, called the Donaukanal (canal of the Danube). Along the canal are bike paths on both sides.

Alternatively, to catch a glance at some of the most impressive buildings Vienna has to offer, take your bike tour around what’s known as the Ring, which is the boulevard encircling the old city center – there are bike lanes all the way around it. This will allow you to keep the kids happy, while you can soak in many of the sights to be seen in this magnificent city.

Where to start your bike tour? Whether you are going to ride the Donaukanal or the ring road, begin at the very central Schwedenplatz where there are many city bikes for rent.

Spend an afternoon at the oldest zoo in the world

Vienna’s Schönbrunn zoo (known as the Tiergarten Schönbrunn) is the oldest zoo in the world, and it shows. It’s not like the animal enclosures haven’t changed, however, the baroque octagonal café at it’s centre and the stucco frills around the place give away the zoo’s age. The prized possession of the zoo is a small panda family, while the collection of animals to see there is vast, including a few elephants and giraffes.

With the zoo being set within the royal gardens of the Schonbrunn palace (be sure to check out the history about this), you can combine a visit to the zoo with a walk around the beautiful gardens. We can guarantee that you’ve never seen a zoo like this one.

We know how difficult it can be to coordinate family city holidays –… never fear, Vienna a la carte tours are here! We’ll create a customised tour for you and the family that will ensure you have a fun, well-rounded and stress-free holiday in Vienna. Ask us more about our tours, here.